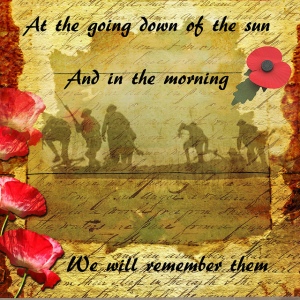 It’s been a deep desire in me, for almost forever, to express my gratitude from the bottom of my heart to the dead and alive Australian and American soldiers.

Every year, I always buy the commemorative souvenirs for ANZAC, Remembrance Day and Legacy Week. The sights of those souvenir selling stalls at shopping malls make me feel bereft and grieving for the fallen Australian servicemen and servicewomen.

I didn’t have any memory of the Australian Army during the Vietnam war. The top two storeys above my family’s house together with the houses in two building blocks either side of An Dong market were occupied by the GIs. I was often given candies by the GIs passing by while I was playing outside my house. I remember fondly those American advisers who greeted me warmly when my father took me to his workplace at Saigon Headquarters.

I was very grateful to America for sending their forces to help South Vietnam fight the Communists.   For a long time, America evoked warm fraternal feelings in me, as if it was a big brother looking after the young and bullied South Vietnam. I wanted to resettle in America after escaping from Vietnam. I was in deep sorrow after the September 11th attacks, just as if a very close friend was under attack.

In later years, when I connected to the Internet, I felt horrified to learn of the massacre at My Lai. Yet for that crime, what America did for the South was still too great to hate it.

I didn’t know of Australia’s involvement in the Vietnam war until four years after I arrived here.   Given the co-operation between South Vietnam and Australia in the fight against the Vietnamese Communists, I expected warm greetings from my Australian acquaintances when I emailed them. I spoke of how proud I was of my father who always marched with other Vietnamese veterans on ANZAC day. Instead I was shocked when one wrote back telling me that all the wars were barbaric and there wasn’t anything so glorious about them.

At the writers group that I joined in recent years, I heard the phrase “all the way with LBJ” and realised that my stories about the South Vietnam before and after the fall of Saigon reminded the group of the Vietnam war, the war that most Australians hated to be involved with.

In conversations with an Australian friend, I was made aware that it was normal for South Vietnam and its people to like America’s involvement but Australia was reluctantly dragged into the war because of its subservient and dependent allied relationship with America. In my naïve mind until then both Australia and America were both free world allies but gradually I began to understand why Australia dislikes America. My friend also told me that Australians felt that the Vietnam war was not their war. I was upset to hear that Australia didn’t care about communism. I told myself that this was likely because Australia hadn’t experience communism before.

I have a friend whose son served in Afghanistan and now is suffering from PTSD and is afraid of sitting in a restaurant because of all the noises.

These days I feel I understand how Australians felt at the time. Unless it affects my now country – Australia – I wouldn’t like my teenage and adult sons to fight in a war between two forces from within the same foreign country just because of their different religious ideologies, even though one side is evil, because I don’t understand their religions.

There is an eternal struggle between good and evil. Should the world take responsibility instead of the greatest amongst the good to fight all the evils? I can see that America has been involved in too many conflicts due to the world’s perception of it as a “beacon and guarantor of freedom” as well as “the sheriff”. I wonder if America ever feels exhausted.

I wore my head band made of poppy flowers to work on the 100th Remembrance Day. I printed the poem “For the Fallen” by Laurence Binyon and placed it on a visible area on my desk so I could have an occasional glance at it. Besides the famous stanzas that are always  recited at every remembrance ceremony, my favourite lines are:

“They mingle not with their laughing comrades again;
They sit no more at familiar tables at home;
They have no lot in our labour of the day-time;
They sleep beyond England’s foam.”

It’s forever a deep desire inside me to express my gratitude from the heart to the dead and alive past Australian and American soldiers but I feel that my Facebook comments are not enough, that they will just conjure bitterness in the people who were conscripted and got wounded for their country. The people who received hostile receptions on their return from their own people, and now don’t get due care from the government that sent them to war.

To those that fought in the Vietnam war, I eternally want to say: “Thank you soldiers!”.

A Spring morning,
The grieving ode,
Does bring sorrow.
The inflow pain,
Shadow the Remembrance Day.

Men with blond hair,
Men with fair skin,
With bare courage,
The savage wars,
Ravage their souls and bodies.

To those who died,
Were denied thanks,
Who tried to fight,
Vietnam tight war,
Despite the plight, South Vietnam thanks you!
(Yadu-style poem)

It’s been a deep desire in me, for almost forever, to express my gratitude from the bottom of my heart to the dead and alive Australian and American soldiers.

10 thoughts on “Thank you soldiers!”