The text messages victim Pham Thi Tra My (26 yo) sent her parents shortly before she froze to death.

The text messages Tra My sent her parents translated:

”I deeply apologise to you, Mum and Dad”

”The road to live overseas is not successful”

”I love you very much, Mum and Dad”

” I die because I can’t breathe”

”I love you very much Mum”

Below is the picture of the parents of one of the 39 lorry-death victim. It shows that the victims could come from wealthy high-ranking Vietnamese Communist official families. 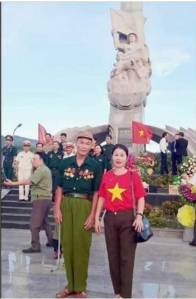 Parents of victim Pham Thi Tra My (26yo). 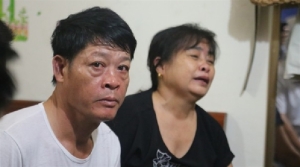 Parents of victim Pham Thi Tra My (26yo) after news of her death in the refrigerated truck in Essex, England.

Facebook of victim Tra My shows she travelled a lot. 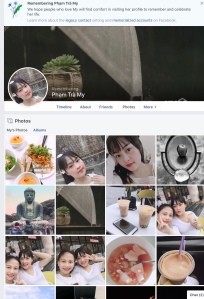 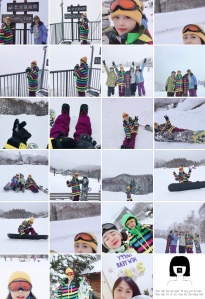 Facebook post of Tra My’s brother Pham Manh Cuong, with picture of the altar for Tra My, asking for donations for her funeral and transportation of her body back to Vietnam. 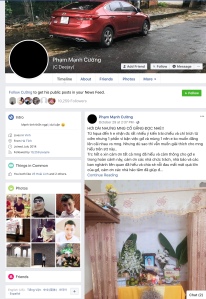 Facebook page of victim Tra My’s brother pleading for donations for her funeral and the transportation of her body back to Vietnam.

Facebook photos of Tra My’s brother included his picture at the airport travelling to Australia as tourist. 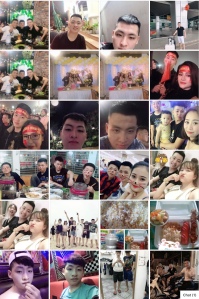 Facebook photos of Tra My’s brother includes picture of him at the airport going to Australia on tour.

In the villages the Essex victims came from, it is impossible to miss the families with relatives working in Britain. Comfortable, sturdy homes with cars parked outside sit next to squat cinder-block houses, many without air conditioning.

A newly built house adjacent to an older dwelling at Do Thanh commune in Yen Thanh, Vietnam, on Oct. 29. (Kham/Reuters)

“ORGANISED crime syndicates have been linked to the spike in Vietnamese asylum seekers to provide cheap labour to run marijuana growing houses and work in brothels.
The Sunday Mail can reveal that top-level advice to Government has warned a spike in arrivals in 2010-11 was directly linked to the drug trade and commercial hydroponic grow houses all along the eastern seaboard.

But the big spike in Vietnamese arrivals over the past year – 759 to date – have been linked with the sex industry and poor fisherman simply seeking work. In many cases they have claimed to have been orphans or minors before biometric checks revealed some applicants had entered Australia previously on tourist visas.

The women detected trading sex in the Darwin detention centre travelled to Australia by boat with men Immigration officials suggested were more akin to ”pimps than partners”. They were later found to be trading sex inside the Darwin detention centre to other detainees before being issued with a cease-and-desist order. Officials said they suspected the women were sent to Australia to work in the sex industry.

In some cases the asylum seekers have been found to have entered Australia previously on tourist visas before destroying their passports and seeking residency to join family members on the grounds they are fleeing persecution.

An Immigration official told The Sunday Mail there are significant concerns that the influx is allowing organised crime to put people on the boats to work in the sex industry or drug gangs.

The hi-tech cannabis houses grow the drug on a commercial scale inside empty residential houses growing crops worth up to $2 million a year.

”It’s organised crime gangs who are already here bringing people out or people smugglers selling the hope of job in Australia. That’s what most people come for jobs,” he said.

”There’s big Vietnamese crime gang involvement in marijuana grow houses and in some cases they are coming out and working as ‘sitters’ for million-dollar crops.”

Foreign Minister Bob Carr said it was clear the majority of arrivals were not genuine refugees.

”The simple fact is that most arrivals claim to DIAC that they have come here for work,” Senator Carr told The Sunday Mail.

Victoria Police have previously warned that almost 50 per cent of people charged with growing marijuana on a commercial scale are Vietnamese with one man who was charged found to have been in Australia only for a matter of days.

In the 1970s, around 2000 Vietnamese asylum seekers fled the country over the five year period from 1976. But after years of only small numbers of arrivals to Australia boats carrying Vietnamese have spiked this year with 759 Vietnamese people arriving this year alone. By comparison, only 50 people arrived last year.

Despite the big influx very few arrivals are judged to be genuine refugees.

But Vietnamese community spokesman Tri Vo insisted people risking their lives on a boat had ”other reasons” for attempting the journey to Australia.

”Without the benefit of talking directly with the asylum seekers the main reason is probably because of the recent crackdown on human rights activists, bloggers and people who speak out peacefully,” he said.

”Pretty much everything is controlled by the Communist party. Therefore it breeds corruption and injustice. People are just unhappy with the system.”

From strawberry-picking student to crop-sitter

The court heard he became a crop-sitter after his student visa expired and his work as a strawberry picker dried up.

Judge Ellis said Ngo’s parents saved up $US19,000 to send him to Australia to study, but as he struggled at university he became involved in the illegal drug trade.

He was a crop-sitter at Raymond Terrace, north of Newcastle, where the place was set up using a normal hydroponic method and the electricity network was “bypassed”, Judge Ellis said.”

“No doubt he was targeted because of his lack of English, naivety, and his young age, while he was in need of money to send back to his family and to survive here,” he said.”

On a crisp winter day in a small village in the north of the Netherlands, a pile of leaves swirls around in the wind outside a brick house, an ordinary scene except for the CCTV cameras outside the front door and the occupants inside – child victims of trafficking. Many of the children are from Vietnam. They live in this protected shelter to keep them safe from gangs who want to smuggle them out of the Netherlands to the UK.

But an investigation by the Observer and Argos Radio of the Netherlands has revealed that, in the past five years, at least 60 Vietnamese children have disappeared from these shelters. Dutch police and immigration officials suspect the children end up in the UK working on cannabis farms and in nail salons.

The findings of the investigation raise serious questions about the efforts of EU states to prevent the trafficking of vulnerable children, and highlight the failings of the British and Dutch authorities to care for unaccompanied minors properly. A recent report from the group Every Child Protected Against Trafficking (Epcat) revealed that there are more Vietnamese children than any other nationality identified or suspected of being trafficked into the UK.

The Dutch police say that many Vietnamese children travel undocumented to London and Birmingham. Only a few of them have ever been identified. In one case, a 17-year-old Vietnamese boy was trafficked from a shelter in the southern Netherlands to work on a cannabis farm in the UK, before seeking the help of British police, who rescued him.

When unaccompanied underage asylum seekers arrive in the Netherlands, the Dutch organisation Centraal Orgaan Opvang Asielzoekers (COA: Central Agency for the Reception of Asylum Seekers) provides them with a guardian to support them through the asylum process. If the Dutch authorities believe a child may be at risk of potential trafficking they are taken to one of two protected shelters, or Beschermde Opvang. The shelter in the north is operated by Jade, the other in the south by Xonar, both companies under a contract administered by the COA.

Johan van der Have, head of the COA, said that despite his organisation’s efforts to protect Vietnamese children, many simply vanish from the shelters. “The minors disappear, no matter what we do,” he said.

The Observer has seen internal emails from the COA and the police that detail the lengths the Vietnamese children go to in order to escape the shelters – they often study maps, sharpen knives to open windows, and tamper with fire alarms. The reports say that people working at the shelters try to prevent the children escaping but are rarely successful.

Concerns about traffickers’ access to these shelters have been growing. Victoria, the co-ordinator of the shelter in the village in the north of the country, said that the protected shelters are used by traffickers as staging posts, where children who have entered the country illegally and unaccompanied can stay while waiting to be collected by the trafficking gangs. “I realised the shelter was used as a stopover on the way to England,” she said. The traffickers, some from eastern European countries, often wait in cars outside to pick up the children.

The UK is believed to be the end destination for the trafficking ring that starts in Vietnam via eastern Europe and Netherlands and France. The Dutch police say the UK is an attractive smuggling destination because trafficked children can make thousands of pounds a month on cannabis farms and in nail salons. Official UK figures show that hundreds of Vietnamese children are trafficked into the country each year, however the actual number is thought to be much higher. Vietnamese nationals are ranked consistently in the top three of groups identified as potential victims of trafficking in the UK as flagged by the government’s national referral mechanism (NRM). From 2009 to 2018, a total of 3,187 Vietnamese adults and children were referred into the NRM.

But the Dutch government has denied there is an issue. Mark Harbers, the Dutch secretary of state for justice and security, said that previous investigations into “disappearances did not lead to evidence of criminal acts. “At the moment there is also no information known to the implementing organisations that a network of people smugglers is involved in the disappearance of underage Vietnamese migrants.”

A Home Office spokesperson said: “Modern slavery is an abhorrent crime that this government is committed to stamping out. All frontline Border Force officers are trained in how to identify and deal with potential child victims of modern slavery and human trafficking as well as those who seek to exploit them.

“Border Force also has a network of specially trained Safeguarding and Modern Slavery (SAMS) teams based in all regions. The SAMS officers are operational and are on hand to ensure children and vulnerable people, including potential victims of modern slavery, are dealt with effectively.”

Revealed: Vietnamese children vanish from Dutch shelters to be trafficked into Britain– The Guardian – Sun 31 Mar 2019 – by Ismail Einashe and Sanne Terlingen.