In 1987, a general election for the National Assembly was initiated across the country. Unfortunately all candidates were required to be primarily selected by the local communist branches, that means no independent candidate was approved, something that was strange compared to my experiences of elections in the free world. Disagreeing with that policy of election, I voted blank in protest. END_OF_DOCUMENT_TOKEN_TO_BE_REPLACED

I went home disappointed but one man’s kind action helped us own a four-bedroom house!

Comments about this post on ABC Open 500 words – The kindness of strangers.

In 1990, my six-person family emigrated and resettled in Canberra. We had to donate our highly valued house (worth an estimated $900,000 AUD now) in Vietnam, in exchange for our passports.

It’s an important Asian tradition to own, says the proverb, “A house to live and a grave to die.” END_OF_DOCUMENT_TOKEN_TO_BE_REPLACED 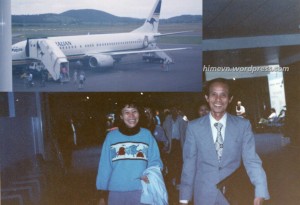 The drought of happiness has finally ended after long lonely years! (In picture, hiMe’s family arrived at Canberra Airport in November 1990 aboard an Australian Airlines flight from Sydney: her Dad, her younger sister, her Mum (wearing glasses), her youngest brother and her youngest sister.)

<<Facts, pictures and video clips related to this story – The Humanitarian Operation that let political prisoners to immigrate to America.>>

Comments about this post on ABC Open 500 words – Endings.

30/4/1975 was the day of the fall of Saigon and because he was a Signal Corps Lieutenant Colonel of the South Vietnam Army, my father spent ten years in various hard labour camps. On release, he was issued a “TEMPORARY RELEASE” paper which meant that he could be re-arrested at any time for any reason. Moreover, every week for two years, he had to present himself at the local police station to report what he did, where he went, whom he met during the week. During that two years, he was not considered a citizen of his birth country and wasn’t allowed to work. Even after he was restored his “Citizen Rights”, with his background, no one wanted to hire him. END_OF_DOCUMENT_TOKEN_TO_BE_REPLACED

I assured the Ambassador Chief of Delegation that the communication system between Paris and Saigon would be restored soon before the Conference should have started the next day.

Comments about this post on ABC Open 500 words – Failure.

The Paris Peace Conference started in 1968 and ended in 1973, with the signing of the Paris Peace Accords for a settlement of peace in Vietnam.

The conference was held at the International Conference Hall on Avenue Kléber, Paris every Thursday. A Military Intelligence Team and a Signal Team were attached to the South Vietnam Delegation, which was located on Avenue Raymond Poincaré, Paris. END_OF_DOCUMENT_TOKEN_TO_BE_REPLACED

I used to be a commander. Ten years in jail and two decades later it was panic on the first day in my job.

Comments about this post on ABC Open 500 words – On the job.

My family resettled in Canberra in November 1990 under the sponsorship of our daughter hiMe, who worked at the Australian Bureau of Statistics.

I was 57 years old then. I needed a job to support my family. I was a graduate Electronics Communications Engineer at the US Army Signal School, so I applied with Telstra.

Telstra accepted my application but I didn’t hear from them for a long time. END_OF_DOCUMENT_TOKEN_TO_BE_REPLACED

I had to choose between my own safety and my family. I chose my family. (Picture owned by Timothy D. Timothy D at the BOQ (Bachelor Officer Quarter) room of the Fort Monmouth Signals School, New Jersey, USA in 1973.)

Comments about this post on ABC Open 500 words – Things we do for love.

I applied for family evacuation, reserved for high-ranking officers through the American Advisory Group. END_OF_DOCUMENT_TOKEN_TO_BE_REPLACED