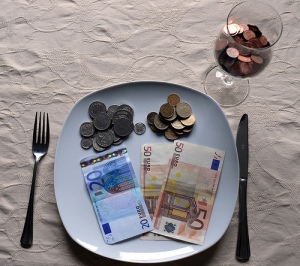 I grew up vowing never to follow the custom that I saw as unfair and corruptible.

Comments about this post on ABC Open 500 words – Shaped by childhood.

It was nearing the end of a meal, and people were still busy chatting to each other. Suddenly I heard the steady, pounding noise of someone running, then I saw a strange scene unfolding between Mr Frugal and Mr Opportunistic inside the restaurant by the cash register. The two men, red-faced and smiling, were grabbing at each other’s hands and pockets. Each was preventing the other from paying for the group’s meal. Money was shoved back into each owner’s pockets and hands were moved away from the till. The two men were heard shouting things like: “No, let me!”, “Please don’t do that, you are so weird!” Strangers may appreciate how eager and obliging both men were in displaying their hospitality.

I was still young at the time, but I realised why the two men wrestled with each other to foot the bill. It was a cheap restaurant and would not cost a lot for someone to fork out for the group. On the contrary, everyone dreads paying at an expensive venue, where those who are selfish, inconsiderate and know that it would not be their turn, would freely order an excess of dishes and drinks.

I was told that in our culture, it’s a taboo, rude and ‘mean’ to ask the individuals, acquaintances, friends and relatives to pay for their own meals. I learnt that Vietnamese are rather afraid of ‘losing face’, so instead someone who usually is the eldest, high-ranking, wealthy or a male would pay for the group and hopefully someone else would pay next time.

With my family’s experience, I observed when it was someone’s turn to pay yet they did not turn up at the gathering, or if they attended then they would ignore that it was their obligation to shell out. Insisting someone should pay is unheard of in the Vietnamese custom.

I remembered that the crowd at each event generally varied, and when no one volunteered to pay, the same person with the highest prestige would desire to keep their reputation as ‘generous’ and not being labelled ‘stingy’, would always have to step up to pay.

Bizarrely, I also witnessed moments when the financially able elder relatives or high-status members of the group blissfully and immorally ‘forgot’ to take the initiative to settle the bills, even it was their turn. In that case, ironically, it happened that the inferior member who possessed a good conscience bitterly paid to keep the harmony in the group.

Seeing the unfairness of the eating-out rule, growing up I vowed never to follow the protocol. Even when going out with groups or just a friend, I refused to participate in “I’ll pay for you this time and you’ll pay for me next time.” custom. I didn’t care if people think of me as ‘breaking the tradition’, ‘a scrooge’.

These days, when I went out with other Australians, with the ‘go Dutch’ policy, I noticed plenty of times when the table collected more money than was required, but there were also times when the collected money was short. Again, when it occurred, usually the host of the event or a respected member of the group paid the gap.

It’s the tradition, it’s the custom,
That you have to follow,
Oh, why you look so glum?

Those past get-together,
Where were you?
Your turn to pay now, don’t be a dodger!

The eating house is all cleaned up,
No trace of the lavish party,
Your modest monthly wage is too burnt up!
(Blues-style poem)

I grew up vowing never to follow the custom that I saw as unfair and corruptible.