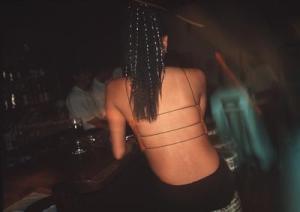 Photo by Jim Gensheimer/San Jose Mercury News. 2/2000. –VIETNAM– The bar scene in Ho Chi Minh City is complete with women wearing scant outfits. Right after the war, this kind of dress would have been cause for imprisonment. As Vietnam opened up to the West in the early nineties, dress codes were relaxed.

US sailors of the visiting USS Curtis Wilbur drink and chat with Vietnamese women at a bar inside a dancing in downtown Da Nang on 29 July 2004. The Arleigh Buirke class guided missile destroyer is on the second port call by an American military vessel since the Vietnam War ended three decades ago. The 342-strong crew of the ship will spend six days in the city where US Marines landed in March 1965, becoming the first American combat troops in Vietnam. (Photo credit should read HOANG DINH NAM/AFP/Getty Images)

HO CHI MINH CITY, Vietnam — The trouble for Henry Liem begins every time he prepares to return to his homeland.

Getting the required visa from the Vietnamese government is a breeze. It’s the “second visa” — from his wife worried that he will stray over there — that requires diplomatic skills.

“My wife is always cranky every time I go,” said Liem, a philosophy instructor at San Jose City College who visits Vietnam twice a year to teach at a university. “So I rarely disclose my upcoming trip until the last minute. It’s pain minimization. The longer she knows, the longer I have to bear the pain.”

Thirty-six years after the Vietnam War ended, Communist government officials openly welcome Vietnamese-Americans back, even those who fought against them. But another Civil War has erupted, this one pitting Vietnamese-American women against their husbands and boyfriends who want to return to the Southeast Asian country. The men’s significant others contend that Vietnamese women lie in wait to ambush them, often eager for the financial stability such a match would bring.

“All the girls in Vietnam are aggressive. They attack!” said Ha Tien, 38, who owns an accounting business in San Jose. She said she lost her man to such a love guerrilla a few years ago.