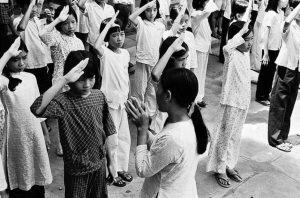 I didn’t play very well and very long my part as a Communist Youth Party candidate.

<<Facts, pictures, video clips related to the story – Saigon’s face before and after falling into Communist hands>>

When Saigon fell into Communist hands on 30/4/1975, Mum thrice refused to have our family evacuated, a privilege reserved for high-ranking officers through the American Advisory Group. Dad (a Signal Corps Lieutenant Colonel) battled ’till the last minute at Headquarters in Saigon. As a result he was sent to a series of “re-education camps”, which were in fact labour camps, from the North to the South for ten years.

People swapped dresses, skirts,and coloured clothes for simple black or white pieces. Women dared not wear nail polish or high heels. Men’s hair that were deemed longer than standard, as well as Western flared pants were cut by local police on the spot. Bicycles replaced cars on the street. Loud speakers woke people up in the mornings with the ringing of “Labour is glorious!” and “Moving forward fast and strongly towards communism!”.

Herbal medicine was promoted in place of Western medicine and demobilized, military herbal-medicine healers replaced doctors or took prime positions in hospitals. Saigon’s famous writers and performers were either ‘re-educated’ or jailed. Saigon’s TVs and radios were flooded with Russian and Vietnamese communist songs sung by singers coming from the North. The main theme of the communist regime then was to favour participants in the battle against the ‘Imperial US’ and South Vietnam’s regime and to promote ‘labour’ as well as the ‘working class’.

Those whose parents worked for the South Vietnam’s regime were advised to become Communist Youth Party members so they could be admitted into Universities. Naturally I became a Party’s candidate, but planned to leave the party after I got into University.

I was assigned tasks to prove that I was ‘good’ such as tutoring poor students, rostering to guard the school after class and supervising The Ho Chi Minh Pioneer Children groups. When the school went to build irrigation canals at Saigon’s outskirts, my input was ‘observed’ by an existing Party member whose parents were communist moles. Every month, I had to give my ‘observer’ a self-criticising paper, in which I had to promise to overcome any weakness to do better in the future.

Living with the Communists made me so depressed. While my father was in jail, I also witnessed the forfeiture of the bourgeoisie’s assets and their displacement to the barren land of the New Economic Zones. I didn’t know when it was going to be our turn. On top of that, playing the role of a party candidate and pretending to be something that I didn’t really like made me feel stressed. I came to school but became withdrawn from everyone.

Concern over my self-criticising paper came to a head when my Physics teacher told me in front of the class that I was isolating myself from others, I replied “I’m not! Why would you say that?”. My teacher cried. I quit being the Party candidate after they tried to have me expelled for my “impolite” conduct towards my teacher.

In the end, I got accepted into the Polytechnic University with my good exam marks.

I didn’t play very well and very long my part as a Communist Youth Party candidate.