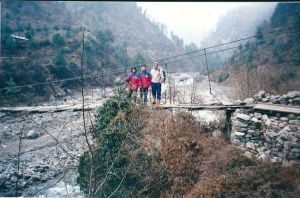 The Himalaya trip is forever a vivid remembrance as my courage was put to the test. (Picture owned by hiMe (people in picture: hiMe, her husband and an elder in the group.))

Comments about this post on ABC Open 500 words – Travel tales.

I forever an unenthusiastic traveller, went trekking with my husband in the Himalayas on our honeymoon, 19 years ago.

My father-in-law heard it was dangerous and suggested that I shouldn’t go.

Fearful to be by myself in India waiting for my husband to return from Nepal, I decided to follow him.

People who knew me often remarked that I was brave.

In fact, I’m not a fearless person. I fear flying, mountain-climbing, and altitude sickness.

I couldn’t get last minute injection on meningococcal meningitis and it preyed on my mind before and during the trip.

We left Hotel Shanker in Kathmandu at 4am for the 7am flight to Lukla but we could only fly out on the third day when the fog had cleared.

Our nine-person tour group, plus six Nepalese locals and our own three-person crew fitted into a small plane with inward-facing seats on either side.

My heart beat loudly when our delicate plane tried to land on Lukla’s 450 metre hillside runway, the world’s most dangerous airport.

We covered 10 kilometers per day. I was always the person trailing behind the group.

Midway, a couple in their 70s weren’t fit enough to continue.

My real challenge came when I had to walk 1.5 metres on a sandy track that was one-foot wide.

My husband held my left hand while the guide held my right one to help me get across. Sand under my feet was falling down the cliff as I passed.

The sights of shrines built along the way for trekkers who had died dashed my spirit.

There were suspension bridges hung with ropes that swayed or creaked with every step. I was scared I may fall down between the two suspenders of some bridges that had no handrail.

The inn where I was staying at Namche Bazaar (3446m) for two days while my husband continued ascending to Thyangboche (3875m) had no lock on the door.

I felt anxious and left the light on all night. I could only sleep for brief periods of time.

Also staying there were two 18-year-old Japanese boys who cried and regretted that they had joined this expedition. Seeing them made me feel better as at least I didn’t cry.

I was glad the terror was over at the end. I really looked forward to a shower as I didn’t have one during the twelve-day trip. The rest of the honeymoon was three weeks spent exploring other parts of Asia.

I’ve married an avid traveller. We’ve travelled so many places my memory is fuzzy but the Himalaya trip is forever a vivid remembrance.

As dust cloud settles, Kathmandu is shown,
A rustic, brownish, backward mountain town.
The pensive stupa hears dirt roads intone,
The sadhu dreams as the pyre fire dies down.
Mount Everest forever in white gown,
Smiles at the human conquest of summit,
And cries for the dead who failed to make it.
(This is a Rhyme-Royal-style poem)

The Himalaya trip is forever a vivid remembrance as my courage was put to the test. (Picture owned by hiMe (people in picture: hiMe, her husband and an elder in the group.))